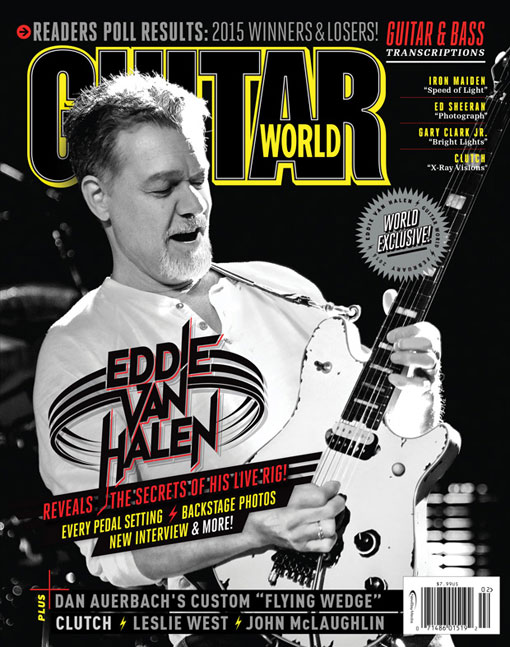 Guitar World‘s February issue features Eddie Van Halen on the cover, along with an exclusive in-depth feature story that covers every detail of his rig, including the signal path, amp and effect settings, and other insights into his signature sound.

The magazine has posted a few online excerpts from the issue, including some insight into his guitars, amps, effects and post effects, such as the background story to a custom-built Wolfgang USA that he was seen playing during Van Halen’s 2015 tour.

Eddie initially planned on using the Wolfgang USA with a Stealth black finish and ebony fretboard with dot inlays, which had served as his main guitar during the entire 2012 tour, as well as for  television appearances the band made in early 2015.  EVH Gear Master Builder Chip Ellis put a wrinkle in those plans, however, when he sent Eddie a Wolfgang USA guitar he had built featuring  a heavily relic’d white finish, block fretboard inlays, and a custom kill switch.

“I wanted a white guitar that was relic’d,” Van Halen told GW. “Chip built that for me and did a wonderful job. I compared it to my trusty old Stealth, and the white guitar sounded better, so it immediately became my main guitar for rehearsals and the tour.”

Learn more about this guitar, and enjoy some of his other rig secrets here!