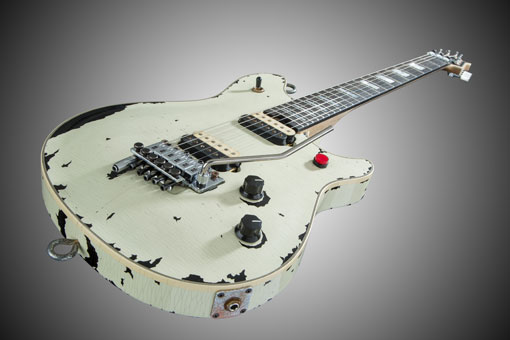 For the legion of fans who attended the 2015 Van Halen Tour, it’s unlikely they failed to notice the striking, aged-looking Ivory Wolfgang USA guitar that Eddie Van Halen played onstage.

In exciting news, EVH Gear has announced that it will make available an exact replica of this very instrument for consumers with the release of a limited 20-piece run of custom-built EVH Wolfgang USA Tour Relic Replica guitars.

Van Halen originally planned on using the same Wolfgang USA in Stealth Black that he played during the band’s 2012 tour, but he also asked Master Builder Chip Ellis to build him this guitar with a detailed relic treatment so that the original coat of black paint showed through the Ivory top coat.

“Chip built that for me and did a wonderful job,” Van Halen said in a recent interview. “I compared it to my trusty old Stealth, and the white guitar sounded better, so it immediately became my main guitar for rehearsals and the tour.”

Famous for tinkering with his guitars, Van Halen decided to sand down the back of the neck since he felt it was a little thicker than what he typically prefers from his neck profiles.

“It’s still a little fatter than the Stealth’s neck, but I’m happy with it, so it stuck,” he said.

“It’s the only volume pot I’ve found where I can play ‘Cathedral’ without any crackle or pop,” he said.

All of these features will be found on the EVH Wolfgang USA Tour Relic Replica, which also comes with a Custom Anvil® white case (with black interior) featuring the Van Halen logo, Certificate of Authenticity autographed by Eddie Van Halen, EVH instrument cable, EVH strings .009-.042 and an EVH leather strap with dog leash clasps.