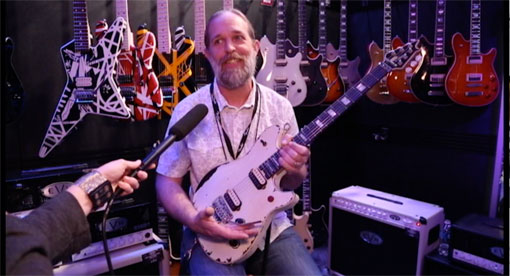 In a new video, EVH Master Builder Chip Ellis gives a quick rundown on the features of the new custom-built Wolfgang USA Tour Relic Replica. Limited to a 20-piece run., the guitar is an exact replica of the aged-looking Ivory Wolfgang USA guitar that Eddie Van Halen played onstage during Van Halen’s 2015 tour.

Ellis also shares what it’s like to work so closely with the legendary Eddie Van Halen.

“Working with Ed on these projects over the years has been amazing,” he says in the clip below. “I never thought that I would learn so much working with an artist about guitar construction, setups and sound and everything. When we first started on Wolfgang, we spent almost a year on just the pickups alone. It got to a point where I was losing confidence in myself like, ‘I don’t understand what he’s going for.’ We had gone through hundreds of pickups basically, but he can point out—he can like bend a note, and the way it starts to feedback with the amp, he can just pick out that part of the sound that you are hearing and be like, ‘That’s it right there, do you hear it?’ And then once you hear it,  it’s plain as day.  I mean, that guy, he’s made my ears better. He’s brought up my game as far as construction because  it’s a tough mark to hit. He expects perfection and it drives you hard. It drives you hard.”