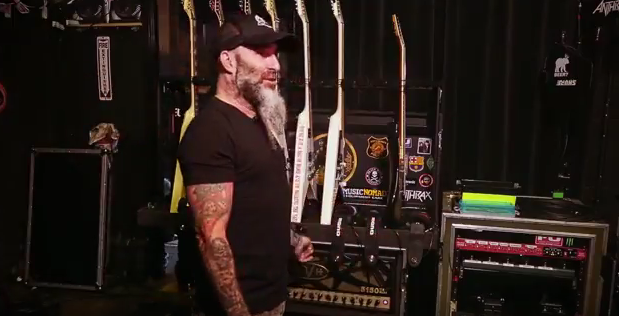 In a new interview with Anthrax guitarist Scott Ian, he explains that he’s been a fan of Eddie Van Halen and his band ever since hearing “Eruption” back in 1978.

“I think he’s the greatest guitar player of all time,” says Ian.” And his tone is ridiculous. From day one, he’s had the greatest tone in rock. Unmistakable. In a millisecond, you know it’s him. It’s the most recognize tone in rock music in my opinion so when he start making his own line of amps, specifically these EVH ones … There’s something about the EVH model, that first one he put out — the white one; I saw that and I was like I’ve got to get my hands on that.

That started a snowball effect where Ian had to have one, then another, and so on.

While Ian has used EVH amps on and off throughout the years for recording, it was not until the last year that he made a decision to make a more permanent change to EVH.

In the video package below, he talks about having his dream amp now with the EVH EL34 100 Watt head and waxes on about its tone, comparing it to “Bruce Lee’s one-inch punch.”