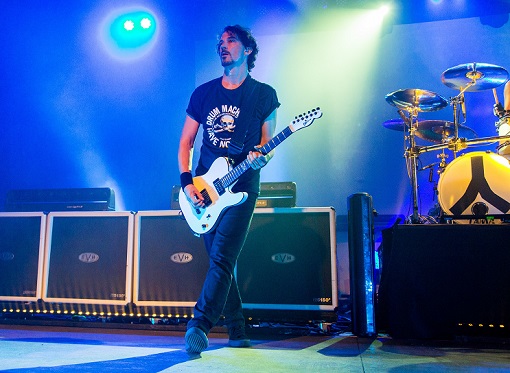 In a new exclusive video with EVH, Gojira’s frontman Joe Duplantier discusses his affinity for EVH amps – from his EVH 5150 III studio use to his EVH Stealth live rig and finally his EVH Lunchbox for dressing room warm-ups.

When it came to hitting the studio to record latest album Magma, Duplantier shared how they A/B’ed many, many amps in search of the absolute perfect tone.

“I remember we spent maybe an entire week just dialing in the amps and comparing amps and guitars, and the EVH Stealth won the competition,” he recalls in the clip below. “Even with a mountain of amps and guitars to compare and to try —I had the blindfold on and said ‘This one! What is this sound?” It was the EVH and the Charvel (guitar). I was really pumped that my gear was the one that I was going to use on the record because the priority when you do a record and when you are in the studio is the sound— that’s all that matters.”

As for his LBX head, Duplantier shares how it has helped foster creativity during a massive touring schedule.

“These little Lunchbox EVH 15 watt heads are crushing,” he says. “When we are on tour we are together and we will have a few hours in the dressing room doing nothing so instead of doing nothing this is the right time to write riffs. At the same time, it sounds so good and it’s so inspiring that we want to write more so that’s important. The quality of the equipment we use is also and inspiration to write more riffs. In fact it’s so good that I even asked my tour manager if it was possible to bring them in my suitcase on fly-in one-off shows. Usually what we do is ask if we can rent some equipment when we get there and it’s always a bad thing— it’s always about surprise because the tubes are too old or something is wrong all the time so now I’m like, ‘Maybe we should bring these little things with us,’ because it’s going to be 10 times better than what we ever find for a real stadium show.”