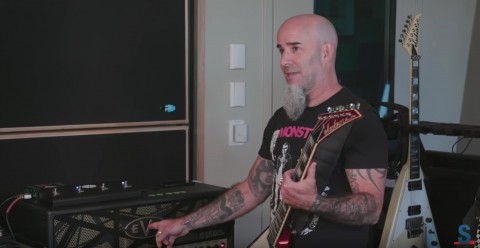 Scott Ian gave Sweetwater a look at his gear in a recent “Rig Tour” episode, in which the Anthrax guitarist discussed his longstanding love of EVH heads.

“I’m not even a lead guitar player, but Eddie is my favorite!” said Ian. “Everything about him, his tone, everything is the best. So when that first series of [EVH] heads came out, I was like, ‘I have to have one!’ I got them all.”

Ian’s rig is powered by an EVH 5150IIIS EL34 100-watt head that gets its bite from four EL34 power tubes that radiate smooth contours and considerable saturation for potent, classic British tone.

“The growl in this thing is like a lion, that guttural lion-like roar and [the clean channel] is super clean,” added Ian.

Check out Ian’s rig in the video below.