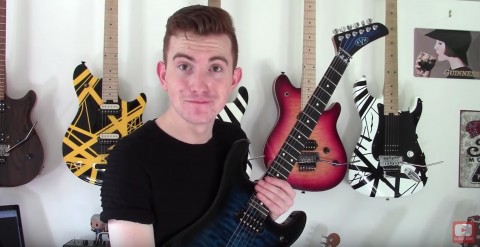 YouTuber axe extraordinaire Cameron Cooper recently posted a review of the EVH 5150 Series Standard and 5150 Series Deluxe in a new demo video, in which the guitarist detailed some of the killer features of these all-new models.

First off the bat, Cooper noted the lighter basswood body of the EVH 5150 models won’t kill your shoulder after hours of jamming, as well as gives off solid dynamic tone with a muscly midrange.

“One thing I noticed, you’ll hear it I think, [the 5150 Series Deluxe] has a far more direct sound,” said Cooper. “There’s a little more punch and top end. I don’t know what could be responsible, the [quilt maple] top or the ebony fingerboard, who knows? I discovered that as a sonic difference.”

So, what was Cooper’s final take away from the new 5150 Series models?

“There’s lots of variety with these 5150 Series, tons of sonic ground as well for you to cover!” he concluded. “Overall, they’re really classy, not overtly EVH instruments. They’re really cool, I am really pleased with them.”