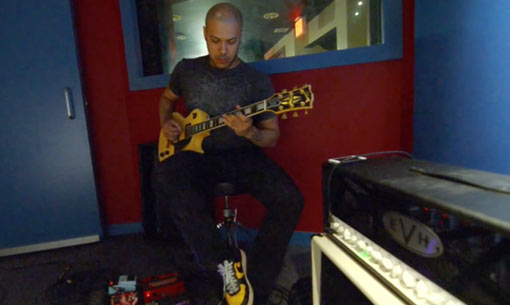 Ex-God Forbid guitarist Doc Coyle recently announced that he has put together a new band called Vagus Nerve, and now there is some music available from the project’s upcoming EP, Visceral.

Vagus Nerve began in 2011, when Coyle and vocalist Ravi Orr first started to collaborate with another. Since then, they’ve added bassist Aden Oxenreider, guitarist Mike Gowan and drummer Maurice Watson to round out the group.

“The philosophy behind the band is focused solely on artistic integrity, devoid of any commercial ulterior motives,” the band posted on their Kickstarter page to support the EP. “It’s just a few guys who love hanging out, laughing, and making music together: no egos, no bullshit. Despite 3,000 miles separating half the members, releasing this EP is all that matters.”

As for the new music, Vagus Nerve dropped a test mix of the song “Do You Know Who I Am” from Australian producer Forrester Savell (Karnivool, Dead Letter Circus).

Check out the clip after the jump and click here to participate in Vagus Nerve’s Kickstarter campaign.